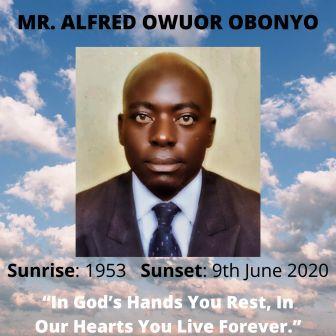 Posted by admin In Messages

The Chairperson, Board of Management, Director and members of staff, Kenya Medical Research Institute (KEMRI), regret to announce the untimely death of Mr. Alfred Owuor Obonyo, who passed away on the morning of Tuesday 9th June 2020 at his house at KEMRI-Mbagathi Road Estate in Nairobi. He was a Senior Customer Relations Assistant at KEMRI’s Centre for Public Health Research (CPHR) in Nairobi.

The cortege leaves the Umash Funeral Home on Friday 19th June 2020 at 8:00 am to his parents’ home in Uhuamba village in Jera Sub-location Ugenya Sub County, where the Burial will be on Saturday 20th June 2020 led by VOSH Church International – Kibera and Bumala Assemblies.

“In God’s Hands You Rest, In Our Hearts You Live Forever.”

Copyright 2020 | AMN. All Rights Reserved.
Need Help? Chat with us
Start a Conversation
Hi! Click one of our member below to chat on Whatsapp
The team typically replies in a few minutes.
Support
Support